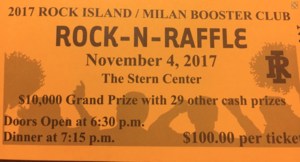 The annual Rock Island-Milan Booster Club Rock N Raffle is coming up on November 4!
The Rock Island-Milan Booster Club annual Rock N Raffle is coming up on Saturday, November 4 at the Stern Center in downtown Rock Island!
This is the premier event of the Booster Club and the money raised goes toward supporting many clubs and activities in the Rock Island-Milan School District as well as individual schools.
Tickets are $100 and include 2 buffet dinners and entrance for 2 into the event in addition to a chance at 29 cash prizes and the grand prize of $10,000! There are also many Rocky door prizes and an expanded silent auction filled with merchandise and specialty themed baskets. Additional dinners can be purchased for $10.
Partial tickets for the prize raffles can also be purchased for $25, $50 and $75 however no meals are included with the partial ticket.
Doors open at 6:30 p.m. and dinner is served at 7:15 p.m.
Download the form and send in for a ticket! Only 300 will be sold!
For more information contact Kevin Guthrie at 309-781-2551.